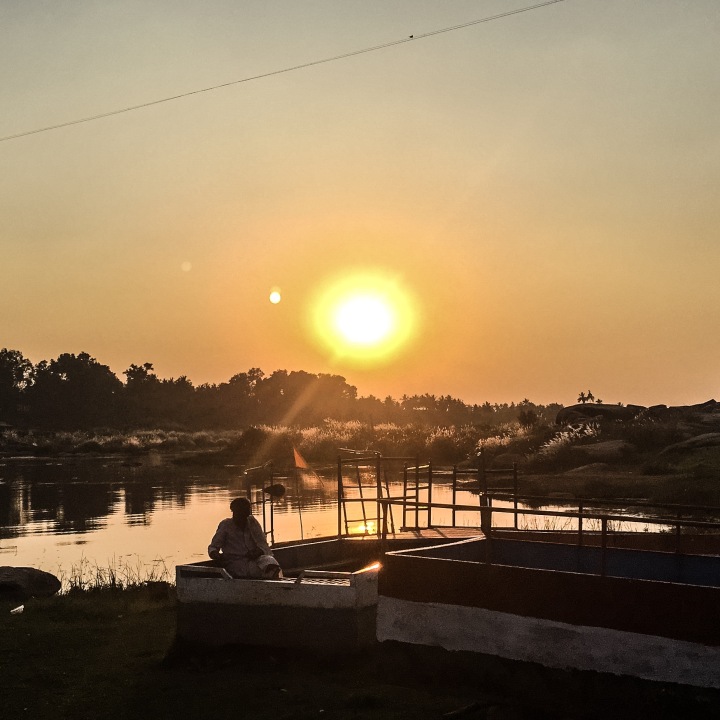 Hampi epitomises the well known phrase ‘Shanthi Shanthi’; peace, calm, and tranquility, which is exactly what I needed after night-after-night of sleepless bus journeys. Unfortunately I spent my whole time in Hampi with a migraine that I couldn’t shift, which I felt hindered my experience of this beautiful, fascinating place. I had heard from travellers all over India that Hampi was their favourite place in India, so I was pretty dismayed to be feeling glum for the duration of my stay.

Staying in the thick of it, the bustling yet strangely tranquil Hampi bazaar is surrounded by the most unearthly landscape you will ever experience. Feeling like I was living in the land of the Flinstones, this absolutely breathtaking landscape is made up of volcanic boulders formed underwater millions of years ago, which began to emerge as the water levels dropped. Amongst the collection of boulders that clutter the horizon, are sandy hued temple ruins, banana plantations, goat herds and their beautiful goat herders, and beautifully dressed village women shining under the sun in their mirrored garments. Hampi is the hardest place to describe, and I now realise that the only way you can truly understand its bewitching nature is to go and experience it for yourself.

Laying claim to a mention in the Hindu epic ‘Ramayana’, there is no way I could leave the major Hindu site of Hampi without absorbing all of the temple ruins it has to offer. Beginning at the main temple, Virupaksha which lies at the head of Hampi bazaar, we had heard you could go and see the temple elephant Lakshmi having her morning wash in the river. Lakshmi is the name of the god Vishnu’s wife. Eager to go and see this highly regarded animal at work, we wondered through the temple gopura’s (towers), which were actually just ruins, and down to the river side to see Lakshmi for ourselves. After her assistant had gave her an extremely lengthy scrubbing as she lounged in the shallow water, we then followed her into the temple where she was paraded round and knelt in prayer at every shrine she passed. Along the journey she also blessed the local ladies sat on the roadside for the payment of a chapati (which she devoured), or a note which she wisely passed up to her escort who sat on her neck. It was pretty special to watch such an enormous animal walking around the grounds of a sacred place freely and knowing exactly what to do. This procedure happens every single morning after all! Having been hassled by many locals about the temple tour by bike, we decided this would be a wonderful way to see the sacred section of the area. Waiting in the main courtyard of the temple, I watched as the locals sat and ate their breakfast alongside the monkeys; there was something quite special about their relationship. Stepping outside the main temple gopura, you can see the remains of the old bazaar stands that lined the entrance. This particular bazaar was used to sell the finest of Indian jewels. I didn’t know that every Hindu temple should traditionally have a bazaar at it’s entrance. Although the main Hampi bazaar has moved a little further from the temple entrance, there are plans to re-develop the original stands in the future. If that is in Indian time, I will expect to see the redevelopment 20 years from now!

Riding up to the top of the Hemakuta hill overlooking Hampi bazaar, we began our tour at the ruins of a Ganesh temple; it was here that I finally confirmed the 3 principal Hindu gods being ‘Brahma’ the creator, ‘Vishnu’ the protector and ‘Shiva’ the destroyer. I already loved how informative this tour was, I learnt so much about the Hindu religion and cleared up many queries I had, which was also made even better by the calm story-telling voice of our guide Hanuman. Walking under the grecian-like pillars, there was an enormous stone Ganesh (son of Shiva) statue tucked away in the darkness. There was something familiar about it, like something I have seen in a movie. Sadly we learnt that due to the sculpture being damaged it was no longer an active place of worship. Originally this Ganesh temple was the entrance to Hampi; lying at the top of the hill you had to pass through here to get to the main Shiva temple below. This is because Hindu’s must always worship Ganesh, the god of luck, before they worship any other. Our next Yali (the mythical name for south Indian temples) was a Krishna temple that was also not in use anymore. Krishna is one of the 10 incarnations of the main god Vishnu. Like I had witnessed before, every Hindu temple has it’s surrounding pilgrim halls where pilgrims eat and pray in the presence of their holy place. I really liked this about Hinduism, the sense of community and protection. Not to sound like a cynic, but many religions often work against people. Moving swiftly onto our next site, we came across a huge stone carving of Vishnu as half man, half lion. It was here that we also saw a Lingam; a deity based on fertility made from stone shaped to depict a man and a woman’s sex organs. Entering the royal sector of Hampi, we were shown the palace ruins which didn’t interest me as much. It was pretty hard to imagine the royalty when all that remained was pieces of rubble, hardly the grand opulent palaces of Rajasthan that still remain. To our last and my favourite temple of all, the Hazararama temple. This temple depicted my favourite story of the Ramayana. The story unfolded in 3 different layers of exquisite carvings, which are read from right to left. Things become a lot more interesting when you know the back-story. It was here that we learned that India is known as the Kingdom of Gods, and Sri Lanka the Kingdom of Demons. In the story of the Ramayana, Rama the blue god ventures to Sri Lanka to rescue his wife Sita from the evil rapture of Ravana the god with many heads. It is his return from Sri Lanka that is the biggest Hindu festival of Diwali.

The following day I decided to venture over to the opposite side of the river where you find a further collection of dramatic boulders and the local Anegundi village. Crossing by boat, we arrived on the other side to discover that my bike was already falling apart, so we decided to rent a moped instead, considering the village was 6km away. Setting off and realising we were driving a hairdryer on wheels, we slowly weaved down the roads of Hampi through a landscape that honestly gave me goosebumps. With the azure cloudless sky and sand hued rocky terrain, we cruised past the lovely locals going about their daily business. Eventually arriving in Anegundi village, we dawdled through the quaint stone houses surrounded by gorgeous flora and fauna. We passed an Indian brass band parading the streets, announcing a wedding. Eventually finding a desolate Ramayana temple on the rock-side, we began walking through and quickly got accompanied by a few young local boys who clearly wanted to show us what it was all about. This really reminded me of the scene in Slumdog Millionaire when Jamil adopts the job of knowledgeable tour guide around the Taj Mahal for some naive locals. Their presence actually enriched our time and I could’ve stayed there exploring with them all day. We climbed through caves and over the large boulders upto the back of the temple where we got a fantastic view of the terrain. It was there that the boys pointed out wild crocodiles in the moors amongst the rocks. They also convinced us that beyond this hill there were lions, however I think they meant sloth bears. As we wandered back into the village and reluctantly leaving the boys, we were swarmed with adorable children returning from school, grabbing us by the hands asking for “school pencils, school pencils!”. To my despair I didn’t have any pens in my bag, and after asking the local stall man how much a school pencil was, I realised I would’ve had to buy over 30 of them! This village was so beautiful, there was nothing touristy about it, the locals were such wonderful people all smiling at us as we walked past. I could stay here for days. Jumping back on the hairdryer we started to make our way back through the incredible terrain in order to make the last 5pm boat back over to the bazaar side. There were some beautiful secluded guesthouses over this side of the river that you could escape to, and although it was nice to be in the hustle and bustle of the bazaar, next time I will definitely stay here away from reality. Driving past Hamunan temple which was perched precariously on the top of a set of boulders, we passed a field and to our sheer delight it was full of puppies! I love dogs with all of my heart, however in Asia I steer clear of the wild creatures as they’re often vicious. However India is oddly the exception; the dogs here are so lovely, albeit mangey, and are clearly treated so differently by the locals. After playing with the 6 puppies for what felt like ages, it was hard to tear us away.

Hampi is such a spectacular place that is definitely ranked in the top places I have visited all over India, undoubtedly the most beautiful of all, however I did miss out on visiting waterfalls and a few other hot spots because of not feeling well. The only solution is to come back…..see you again Hampi.