There is a slight lull the morning after the wedding, after all it was completely epic. I cannot have started my India experience off any more spectacularly. One by one the wedding party began dropping off, returning to their home countries while I would remain to another two months of cultural indulgence.

As I said in an earlier post, Amritsar is home to the Sikh’s holiest of shrines, where their original holy book is kept, in the spectacular Golden Temple. It was exciting to venture out properly for the first time. The streets were bustling just as expected, with rickshaws and mopeds weaving manically through hoards of jewelled sari’s and street food vendors. Entering the Golden Temple, also known as the Sri Harmandir Sahib, we removed our shoes and covered our heads, pushing through the hundreds of people. The nice thing was, the crowds were not tourists but Sikh’s coming for prayer and to drink the holy water from the pool of nectar that surrounds the temple. However, the four entrances to the temple symbolise the openness the Sikh’s have towards all people and religions coming to drink their water of immortality, so we were very welcome. ‘Amritsar’ literally translates to ‘pool of immortal nectar’, which is how this city got it’s name. Although I was only there for the morning, there is in fact community accommodation and food provided to the 10,000 plus pilgrims that visit every single day. The Sikh’s view your presence as an honour. The temple itself lies at the end of the Dura’s bridge, which leads the hundreds of people out into the centre of the pool. The vicinity is spectacular in itself; you have a 360 view of the golden plated shrine, and people bathing in the water. The dome of the temple is made from pure gold, 750kg of it to be exact. This gave the temple even more status when it was renovated in 1830. Entering the temple, you are surrounded by the eerie chanting from the holy book, which is broadcast across the whole area all day every day. Inside is tiny, but incredibly beautiful. on the second level lies the book who’s pages span about one metre in length. Every single morning and night the book is ceremonially escorted to and from it’s safe keeping. You can also climb up to the roof and view the incredible golden dome and spectacular views of the pilgrims surrounding.

I have been to quite a few temples, but I have to say this is definitely one of the most breathtaking and spiritual of them all. A true place of worship, a little further from the madding crowd… of tourists at least! 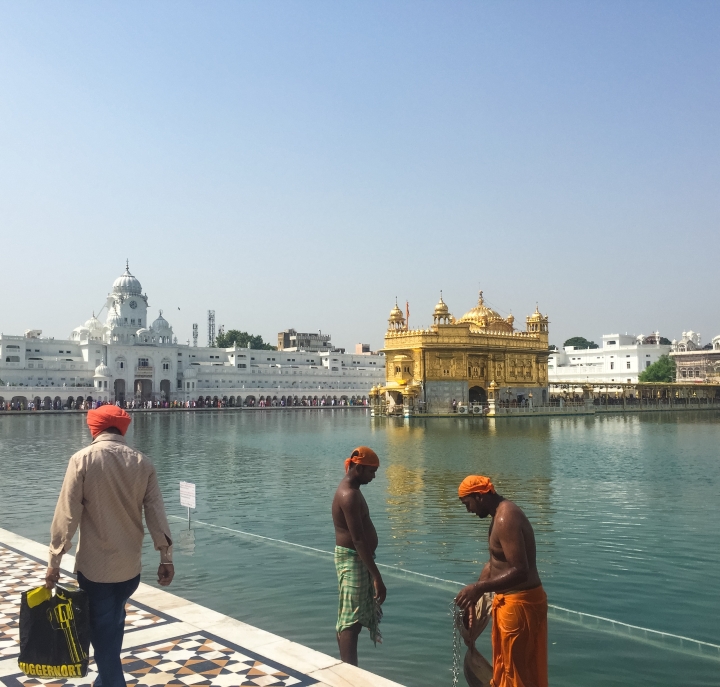 Today, I recently discovered, is the Hindu festival of Dussehra, which is the final day of a 10 day long festival celebrated 30 days before the infamous Diwali, the largest and most sacred of all. This obviously sparked a huge interest to me being part of Indian culture, however even more interestingly it has given me very nostalgic feelings of my favourite film as a child, A Little Princess. I have been referring to that film a lot since arriving in India, however it was today as my hotel manager Manjit explained how Rama, the blue god bearing a bow and arrow, fought Ravanan, the god with many heads, to rescue his wife Sita from a tower, that it all came flooding back to me. I can picture scenes in the film of the beautiful god painted blue. What a beautiful religion.

Following Polly is a solo female travel and lifestyle blog featuring guides, diaries, videos and photography from around the world.

My favourite form of procrastination (& my shop acoustics are 🤌🏼)
Soakin up those rays 🌞 @alyssamullingsphotography
Can I take you in my suitcase on every trip please @alyssamullingsphotography 🤔?
📷
Celebrating these two in the most stunning & magical way imaginable 💍🫒🥂what a beautiful day Mr & Mrs Patrick
Count my lucky stars that I got Milly Jackson as my baby sis.
A tablescape of absolute dreams….. @thelazyolivevilla 🫒
Ciao Mamma 💚

My favourite form of procrastination (& my shop acoustics are 🤌🏼)
Soakin up those rays 🌞 @alyssamullingsphotography
Can I take you in my suitcase on every trip please @alyssamullingsphotography 🤔?
📷
Celebrating these two in the most stunning & magical way imaginable 💍🫒🥂what a beautiful day Mr & Mrs Patrick
Count my lucky stars that I got Milly Jackson as my baby sis.
A tablescape of absolute dreams….. @thelazyolivevilla 🫒
Ciao Mamma 💚
Loading Comments...
%d bloggers like this: